It is nine years since I stood under the Menin Gate on ANZAC day, with other New Zealanders, marking our day of national memorial for the wars of the twentieth century.

The gate spans the Menin Road that leads out of Ypres, a town in Flanders; and during the First World War, soldiers from Britain, Canada, Australia, New Zealand, India and other places walked down that road, usually to their deaths. Part of that road, not far from the town, was under German artillery fire from 1915 until 1918; Hellfire Corner, it was called, and hessian screens were raised – not to stop the shells, but to prevent anyone sniping the troops. The gate, a huge arch, is lined with the names of soldiers who disappeared, their bodies never found, in the churned muck of the trenches.

Later, my wife and I walked the quiet lawns of Tyne Cot cemetery, the largest Commonwealth cemetery in the area and a silent reminder of the lethality of the Western Front. A rotunda carried names – including those of New Zealanders – who had fallen during the Western Front campaign, and were never found. 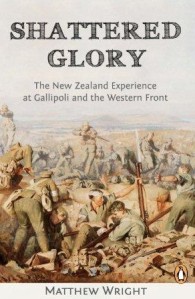 For me that campaign defined the futility of the human condition – the way we intellectualise ourselves into corners. Militarily it was a cleft stick; the triumph of defence over offence. Industrial technology could bring men to a battlefield in unprecedented numbers. It expanded the battlefield to colossal scales. However, it could not move men on it, nor could infantry overcome the barriers posed by machine gun and wire. Once that had developed it was difficult to find a military way out, without new technologies – which were developed. But that took time, and meanwhile men died, and political solutions were never explored.

At the time, of course, it seemed rational and logical. But that is true, I think, of every war humanity has fought through its long history.

We keep falling into wars, just as we keep insisting that we must never fight them again. It is a relentless cycle which, I fear, is a part of the human condition.

As I walked those silent gravestones in 2004 – and as I sit here now remembering the solemnnity of that day, and thinking about the intellectualised rationality, the stubbornness and the horrors of the war that led to these deaths – it gives pause for thought.

What do you figure on this one?