‘Like [Michael] King and [Keith] Sinclair, Wright has profound knowledge of his subject and uses lucid prose to convey it…He is deeply interested in the why of things, in the complex interplay of environment, economics and personalities.’
– Fritz Logan, Timaru Herald, 21 November 2009.

‘Familiar places become much more fascinating and monumental as a result of Wright’s multi-faceted treatment of his subject…the extent of his research into the archives is obvious… We can discern here the true paths of human interaction in all their complexity.’
– Mick Ludden, Wairarapa Times-Age, 17 February 2007.

“Who would have imagined Michael King’s history would so soon be challenged on several major points?  You do not have to be an ageing academic to enjoy the gentle battles of intellectual giants: Wright is readable, and…authoritative.
– James Ritchie, Waikato Times, 23 December 2006.

“Wright is rapidly emerging as one of our most prolific military and social historians, an assiduous researcher and no mere blinkered follower of academic and ideological fashion.  Far from it.”
– Edmund Bohan, The Press, 16 September 2006. 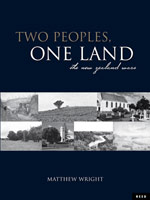 “Two Peoples, One Land marries an impressive breadth of research into a fascinating story that provides new assessments of events that still resonate in our lives. This is an important book that deserves to be read, and one that grips you from the first pages.”
– Christopher Pugsley, Department of War Studies, Royal Military College, Sandhurst.

“Wright is rapidly emerging as one of our most prolific military and social historians, an assiduous researcher and no mere blinkered follower of academic and ideological fashion.  Far from it… Wright has produced as detailed, sensible and satisfactory a military history of the campaigns waged between 1845 and 1872 as one might hope to read…Wright corrects many of Belich’s errors and his more fanciful and extravagant assertions, through superior knowledge of military history and ruthless logic… this book is to be warmly recommended.  It is splendidly illustrated and the footnotes are exemplary.”
– Edmund Bohan, The Press, 16 September 2006.

Freyberg’s War: the man, the legend and reality

“If anyone is best equipped to pen a definitive study of one of, if not the, greatest military leader in New Zealand’s history, it would be Matthew Wright”.
– Mark Taylor, The Southland Times, 20 April 2005.

“Matthew Wright attempts to give a fuller picture of the man who led New Zealand troops…He succeeds. It is a monumental work.”
– Warwick Roger, North and South, May 2005.

“This is an important book for the record. In it, Wright has effectively silenced the doubts about one of New Zealand’s greatest”.
– Jim Callaghan, Wanganui Chronicle, 2 July 2005.

Old South: life and times in the nineteenth century mainland

‘In this book, Wright attempts to meet Leo Tolstoy’s challenge as expressed in War and Peace: the subject of history is the life of peoples and of humanity…’
–  Vic Evans, Nelson Mail, 25 November 2009.

This site uses Akismet to reduce spam. Learn how your comment data is processed.